Why Vienna proved to be the outstanding candidate to host the Ineos 1:59 Challenge

The selection of Vienna as the location for Eliud Kipchoge’s INEOS 1:59 Challenge was the culmination of an extensive worldwide search that started with a map of the world and ended with a pinpoint in the Austrian capital.

The team of experts assembled by the INEOS 1:59 Challenge were armed with spreadsheets of data, scientific information and invaluable learnings from Kipchoge’s previous sub-two attempt at the famous Italian motor racing circuit of Monza in May 2017.

All of this information was processed and separated into key filters that saw potential locations get scrubbed from the list one by one until The Prater, the historic park in central Vienna, was the last name remaining. 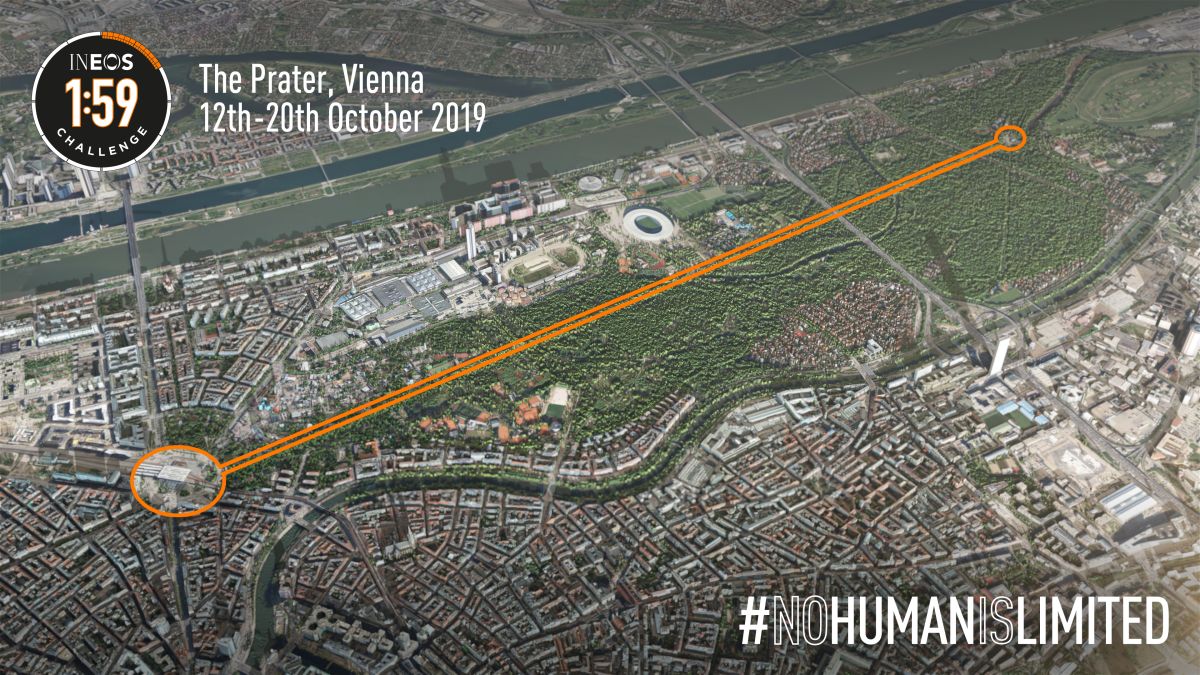 The first filter used by the team was time-zones. What started as a global search was soon narrowed down to locations that were no more than three hours ahead of or no fewer than three hours behind Kipchoge’s training camp in Kaptagat, Kenya.

It will come as no surprise to anyone who has felt the effect of long-haul travel and jet-lag that travelling long distances across time-zones can disrupt sleeping and eating patterns. For athletes, getting out of a routine can affect training patterns too, so for someone looking to go where no human has gone before, it was essential for the challenge to take place in a time-zone as close as possible to the one at Kipchoge’s training camp.

Remember, Kipchoge needs to run 26 seconds faster than he did in the Nike Breaking 2 event in Monza in 2017 to break the two-hour barrier. That is 0.36 per cent faster over the course of the 26.2 miles – a significant challenge at Kipchoge’s elite level - so every single detail matters.

The next filter applied to the search was altitude and climate - and this really did narrow down the options, putting just a relatively small section of Europe as suitable.

Kipchoge might live and train at altitude – his Kaptagat camp is at an altitude of 2,400m - but racing high above sea level, where the air is thinner, is not conducive to high performance in distance running.

This is because, the higher the altitude, the less oxygen there is in the air which then has a knock-on effect on an athlete’s ability to perform.

Many endurance athletes actually choose to train at altitude as science suggests preparing at altitude enables the body to be better conditioned at using whatever oxygen is available, so when the athlete comes down to compete at lower levels, where there is more oxygen in the air, they can push their bodies harder.

Just as crucial as altitude is weather conditions. In general, a temperature of 10c is regarded as a fair benchmark for perfect marathon running conditions, combined with low humidity. The issue of humidity – the amount of water in the air - was one of the areas identified for improvement after the 2017 Monza attempt when an early morning rain shower gave rise to unexpected levels of humidity. In performance terms, the higher the humidity, the harder it is for sweat to evaporate into the air, which means it feels hotter for the athlete than the actual temperature- which can thus impair performance as they are unable to regulate their body temperature effectively.

Dry and still conditions are absolutely essential. It goes without saying that wind can hugely damage performance while rain can have an adverse effect for two reasons: firstly it can add weight to clothing and shoes which, when you are looking for a 0.36 per cent increase in performance could prove crucial. Secondly a wet surface increases the amount of slipping with each stride.

So, with the filters of time-zones, altitude and weather accounted for, the INEOS 1:59 Challenge team were left with a relatively small geographical area to continue to the second part of their search – the perfect course.

With Kipchoge coming so close to breaking the two-hour barrier in Monza, it made sense to use the Monza motor racing circuit as a benchmark throughout the search process, combined with another series of filters based on course geometry and topography.

The fundamentals in a perfect course for Kipchoge were the need for long, straight sections with as few corners as possible. Those bends that were necessary were required to be relatively shallow, as opposed to angles that would force Kipchoge to deaccelerate into and accelerate out of them.

The course needed to be as flat as possible with no camber and, ideally set up in a multi-lap circuit which would make it easier logistically for organization vehicles and pacemakers who, like the Monza attempt, will be rotated in and out. In addition to this, there was a need for somewhere with very good air quality and, crucially for Kipchoge, a location that would attract a crowd to cheer him on.

The Monza attempt in 2017 was relatively sparsely attended and it was one of the key areas that Kipchoge and his team identified for improvement in the INEOS 1:59 Challenge. The Kenyan thrives on the big occasion - the bigger the event and the bigger the crowds, the better he performs.

Finding a course to meet all these criteria was not easy- but after a shortlist was drawn up and detailed site visits carried out, there was, in the end, one unanimous choice: The Prater.

In terms of geography, Vienna is ideally situated. The Austrian capital may be 8,754.6km away from Kenya but it is just one hour behind Kipchoge’s home time zone- which means his sleeping, eating and training patterns should not be greatly affected by the location.

Climatically too it is ideal. Vienna is 165m above sea level and thus able to provide far greater oxygen availability than the 2,400m altitude of Kipchoge’s training camp in Kenya. After extensive research into historic weather patterns of the city, the INEOS 1:59 Challenge team found there is a high probability of it providing low morning temperatures (Kipchoge has expressed a desire to start the race early to match the time of his hard training sessions in Kenya). Combined with its low relative humidity, this is exactly what Kipchoge is after.

Key to The Prater’s desirability is the long, straight and historic stretch of road called the Hauptallee. This avenue that runs through the heart of The Prater has minimal elevation change and could offer a 4.3 kilometre stretch between two roundabouts, thus creating a 9.6km circuit - perfect for the multi-lap course that was being sought – of which 90 per cent is straight.

Finally there was capacity to bring a large crowd to watch along the route- something very high up on the wishlist of Kipchoge himself – and the city of Vienna’s administration were excited about supporting this and sharing the historical moment with its 1.9 million inhabitants.

Vienna may be more famous as a City of Music with it being the home of, among others, Mozart and Beethoven, but Vienna is also a city of running, with a rich history of and passion for the sport among its population.

There was a Running Festival in The Prater as far back as the early 19th century and now the park is the place to exercise in Vienna, for everyone from serious runners to walkers. It is also a key section of the Vienna City Marathon course, which takes place every April and attracts 42,000 runners and an estimated 400,000 spectators.

With the once-in-a-lifetime opportunity to see history potentially being made on their streets, we hope that the Viennese, and the visitors to their city, will surround the course to roar Kipchoge on in an event that will never be forgotten.

Beyond this, a neat historical link also made Vienna perfect. The last distance running world record set in Vienna was 1978, when a Kenyan named Henry Rono set a new 10,000m record of 27 minutes 22.5 seconds.That record was broken on the Vienna LAZ track in The Prater, by a Kenyan born just 15km away from Kipchoge’s birth place- and was paced by a Dutchman named Jos Hermens, who went on to form a sports management agency called Global Sports Communication. The company’s most famous client today? Eliud Kipchoge.

Sometimes things are maybe just meant to be…