The role of the car

An electric car will be used to control the pace of the race.

Peter Vint, Performance Team Manager for the INEOS 1:59 Challenge, said it was the best – and only – way to ensure Eliud ran at the same speed for the entire 26.2 miles.

“Anyone who has ever run a marathon will know just how hard it is to run the whole distance at the exact same pace,” he said. “And while elite athletes are very much better at it, a marathon distance run in just a few seconds under two hours requires exceptional accuracy.”

Peter said Eliud had a tendency to want to go faster or slower at certain times during a marathon.

“The problem is that any variation in pace can cause energetic demands that are more difficult to deal with than having a steady pace,” he said. “And it’s a well understood edict of distance running that the fastest times are set when the pace is even.”

To ensure Eliud does run at the same pace, a car will travel in front of the runners at a constant speed.

Sounds straightforward, but it has been anything but that.

Early on Peter and his team, who were working with skilled engineers, discovered that cruise control systems on cars are not 100% accurate.

“Very few cars have an accelerator resolution that can give you better than 0.1kph,” he said. “If you extrapolate that over the course of a 42km race, that ends up being seconds of time that are left unaccounted for.”

In short, if the timing car ran 0.1kph too slow over two hours, it could be the difference between Eliud finishing the race in under or over two hours.

“That is a big enough error to derail the entire challenge,” said Peter.

So, Peter set his team a goal: to get Eluid over the line in a time accurate to within a second.

“We certainly didn’t want to be outside of a second on either side of our planned finish time,” he said. “If we had it slightly too fast, then ultimately what we would be doing is pulling more and more energy out of Eliud.”

The RML Group, a high performance automotive engineering company, were hired to deliver that precision. 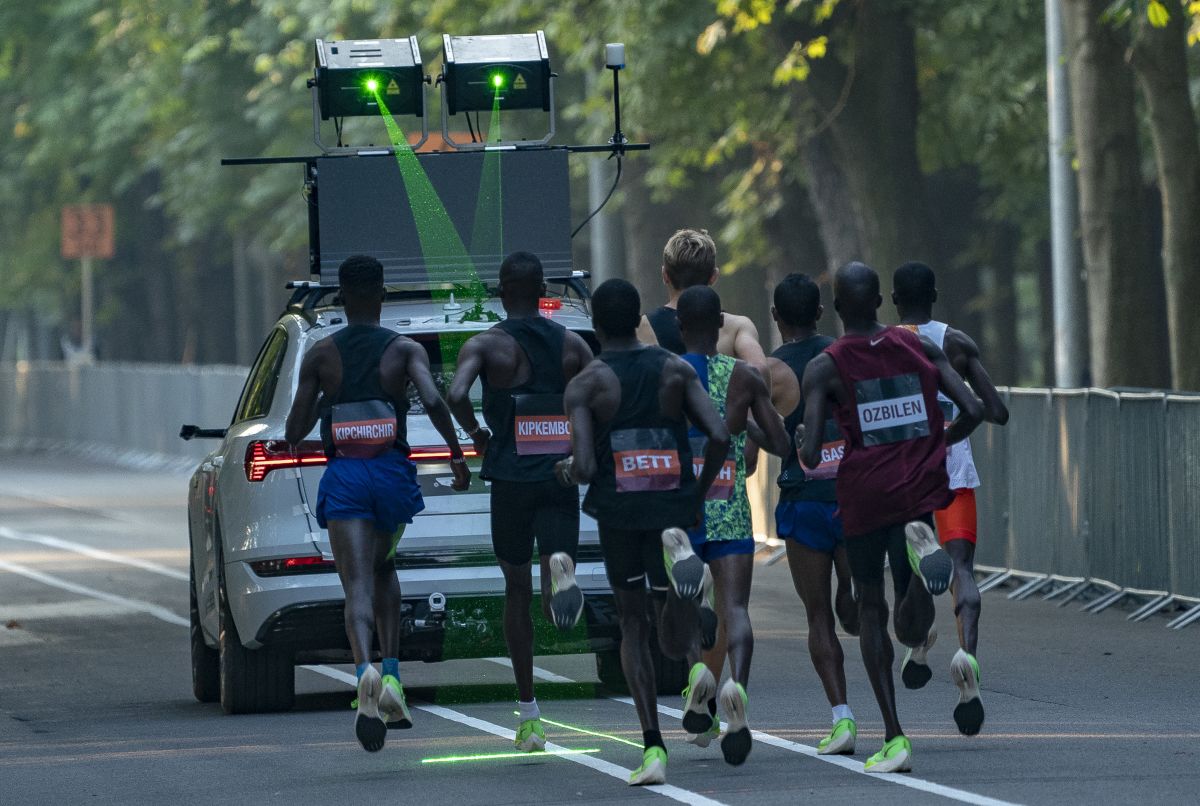 Rehearsals at the testing weekend in Vienna on 1st September. Credit: Bob Martin

“We have been typically hitting the finish line with an error of less than a metre, which equates to less than 0.2seconds over the course of the two hours”

They began by choosing a fully-electric SUV with plenty of space on board for all the equipment needed for the race.

“There will be no emissions out of the back to upset any of the runners,” said Chris Francis, who heads up the Powertrain division at RML’s HQ in Wellingborough in the UK.

The team at RML have worked flat out to ensure Eliud’s journey to the finish line is a smooth one.

The runners and the car will carry a transponder chip, which will be read by each of the one kilometre markers, providing accurate feedback on split times and speeds.

“We will then know exactly when the car passed all of the kilometre split points,” said Chris. “This allows the car to apply a further correction as it travels around the course.”

But that’s not all.

To ensure nothing is left to chance, a second car – equipped with the same software – will be on standby.

“In the event of a problem with the primary car, we can swap the cars, or swap the spare car into position,” said Chris.

Both cars are also fitted with lasers that project a formation pattern and a pace line on the road to help the pacemakers hold their position – and a digital LED board so the runners can keep track of the time.

In training, the cars have performed beautifully.

“We have been typically hitting the finish line with an error of less than a metre, which equates to less than 0.2seconds over the course of the two hours,” said Chris.

It’s a remarkable piece of technology which an impressive level of accuracy — five times better than that demanded by Peter Vint.

“On the day of the challenge, it is likely to fade into the background,” said Peter. “But spectators should maybe spare a thought for the boys in Wellingborough as their timing car leads Eliud towards the finish.”