Eliud Kipchoge believes he is ready to make history and create his “moon-landing” moment in his quest to run an historic first sub-two-hour marathon at the INEOS 1:59 Challenge in Vienna on Saturday.

The Kenyan marathon great, who has won 11 out 12 marathons and is also the reigning Olympic marathon champion, arrived in the Austrian capital city on Tuesday following a night flight from Kenya.

In the pre-event press conference adjacent to the finish line on the Hauptallee in the heart of Vienna, Eliud exuded confidence ahead of his historic bid.

“I’m feeling well, I’m happy with the course and I am waiting for Saturday,” explains Eliud, who last year set a stunning new world record time of 2:01:39 in the Berlin Marathon.

“Vienna is a sporting city. The crowd loves sport in Vienna and the course is flat and fast and in a park – a natural environment.

Eliud has been training hard in his training camp in Kaptagat, Kenya for the past four months and he has been delighted with his preparations.

Training under the coaching of his long-time personal coach, Patrick Sang, and supported by a word-class team of experts in his quest for glory, he believes he has the tools to handle the enormous expectation leading into the race.

“Pressure is everywhere, and I’m trying to stay as calm as possible,” he says. “This race means a lot. I just have to make that click in people’s minds that no human is limited.

“You cannot be physical fit without being mentally fit, if your mind is there then you will be well.” 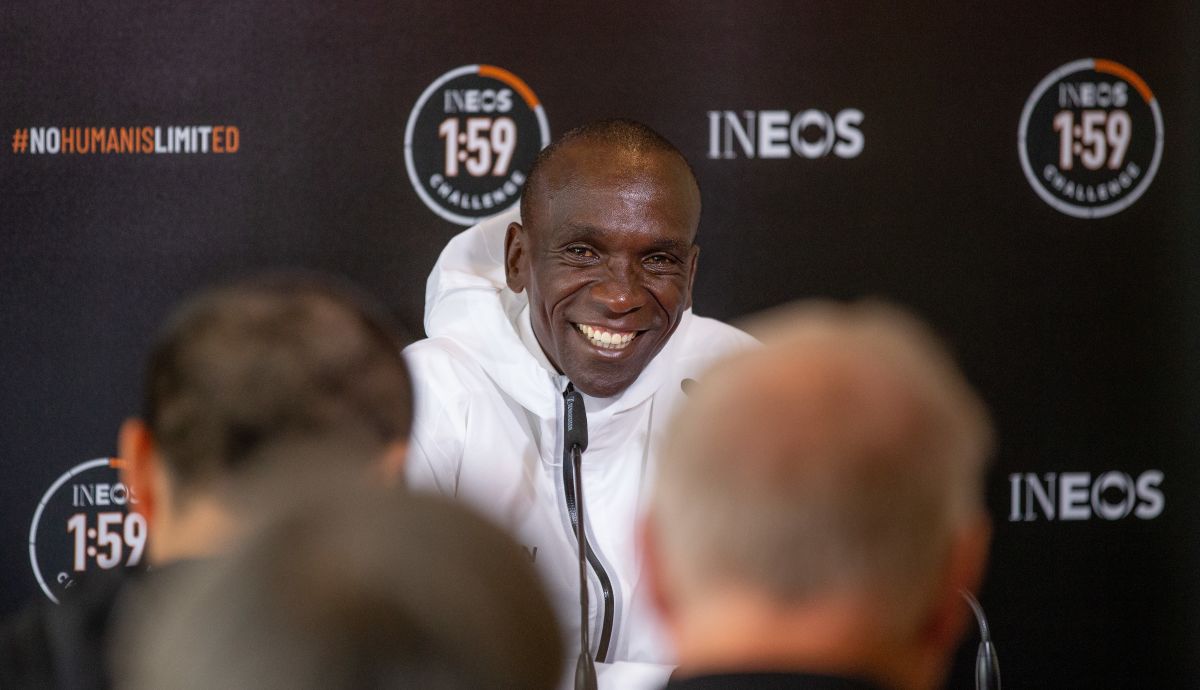 Some two-and-a-half years on and the 34-year-old Kenyan believes he is in a much better position to achieve this iconic goal.

“Before Roger Bannister ran a sub-four-minute mile many humans believed it was not possible,” he explains. “Last year I ran 2:01:39 (in Berlin) no human being at that time thought it was possible. When Kenenisa Bekele ran 2:01:41 (at the Berlin Marathon last month) that is a perfect illustration that no human is limited.

“I feel more prepared, more ready and more confident. I have been running with that (sub-two-hour) speed for the past two years, so it is not a case of wondering how I am going to do it.

“Nothing is 100 per cent certain but I can assure you I am calm and looking forward to Saturday,” he explains. “Saturday is about making history that no human is limited and about giving positivity to the world and making sure every human being smiles.”

In fact, Eliud is so confident, his wife, Grace, and children; Lynne, Griffin and Gordon will be in attendance for the first time at a race. “It means a lot. I would like them to be part of history.”

Eliud will start his historic quest on Vienna’s famous imperial bridge, the Reichsbrücke. After approximately 1.2km he will reach the Ferris Wheel at the Praterstern roundabout where he will enter the Prater and begin 4.4 laps of the tree-lined Hauptallee, the historic avenue that runs through the heart of the Viennese Park.

An electric timing car will be used to control the pace of the race, which will be set at a consistent 2:50 minute per kilometre.

A world class line-up of 41 pacemakers will be used to help Eliud achieve his goals. 35 pacemakers will run on the day and there are 6 reserve runners. Among the top-class names include World Championship 5000m silver medallist Selemon Barega of Ethiopia, former world 1500m and 5000m champion Bernard Lagat of the USA and the Norwegian Ingebrigtsen brothers – Henrik, Filip and Jakob.