With metronomic precision Eliud Kipchoge raced into history today on the Hauptallee in Vienna by becoming the first man to achieve the barrier-breaking sub-two-hour marathon as part of the INEOS 1:59 Challenge.

The greatest marathon runner of all time Eliud achieved a jaw-dropping time of 1:59:40.2 to secure his moon-landing moment.

He was supported by a world-class team including an electric pace car complete with futuristic lasers and a fabulous team of world-class pacemakers, featuring some of the best athletes in the world.

Dissecting the last great barrier in athletics with remarkable consistency – he completed 24km of the 42.2km distance in precisely the pre-designated pace of 2:50 – his slowest kilometre was 2:52 and his fastest 2:48.

It was a performance which perfectly encapsulated Eliud the man - calm, consistent, patient and totally unflappable.

“This was the best moment of my life,” Eliud explained after the race.

“From the first kilometre today I was really comfortable. In my heart and my mind I hoped to run under two hours and make history. I hoped to leave a positive message to the whole world that no human is limited.”

He admitted to facing the pressure. Calls from the Kenyan President plus tens of thousands of encouraging messages around the world inevitably intensified expectation levels.

Yet following 18 years of hard, consistent training under the tutelage of his coach and mentor, Patrick Sang, the wise management of Valentijn Trouw and the additional support of INEOS he was able to achieve a moment in human history to match that of Sir Roger Bannister’s first sub-four-minute mile in 1954 and Neil Armstrong first moon-landing in 1969.

“I was really calm, I just wanted to maintain the pace,” added Eliud whose wife, Grace and three children; Lynne, Griffin and Gordon were watching him compete for the first time.

“I followed the instructions of the pacemakers. At 35km and 40km my mind was focused on running. I did not think it was 50-50.”

Passing the halfway mark ten seconds under the required pace, ensured that there was no bleeding of time in the second half of the race like Eliud had experienced in Monza when taking part in the Breaking2 project when he fell a tantalising 26 seconds shy of his goal.

Since that first sub-two-hour marathon attempt in May 2017 the 34-year-old has further cemented his status as the greatest marathoner in history.

Last year he obliterated the world marathon record with a stunning 2:01:39 clocking in Berlin and earlier this year he secured a record-breaking fourth London Marathon title.

Only a sub-two-hour marathon was missing from his incomparable CV.

His consistency throughout a lengthy career has been mind-boggling. On the track he won two Olympic 5000m crowns and a world title.

He has never remotely experienced a blip in his marathon career – today was thankfully no off-day as acknowledged by a delighted Sir Jim Ratcliffe, the INEOS Founder and Chairman. 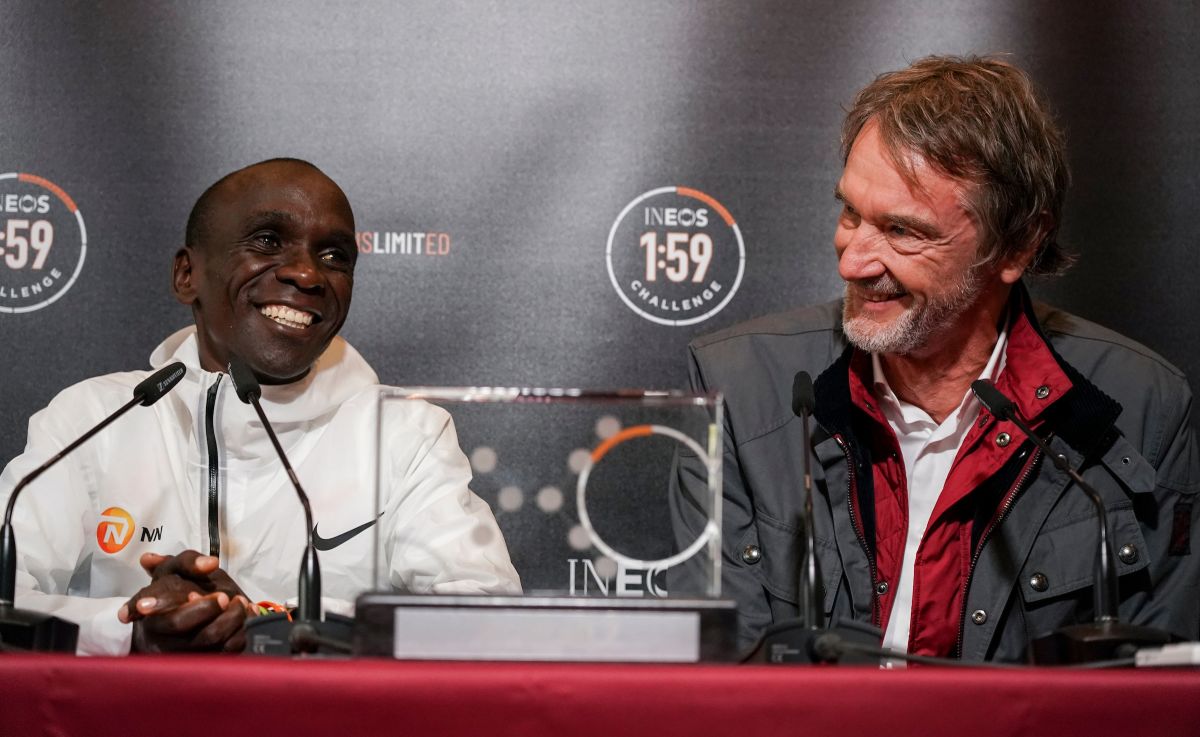 “I’m an amateur runner and sometimes I run well and sometimes not, and I don’t really know why,” Ratcliffe said.“But this is sport and there and no guarantees. I’m just glad he had a really good day.

“That last half a kilometre when the pace car was gone it was just Eliud, it didn’t look like his feet were touching the ground – he looked so calm and tranquil. My face would have been torture.”

Modest and showing typical humility, Eliud praised the key role the 41 pacemakers played in his success. He said they too had “bought into his dream” and the pacemakers too were humbled to have played their part in history.

Two-time Olympian Lopez Lomong said: “It means the world to me. Eliud said we needed to be able to come to the moon and back and we did today. This was a momentous day. The whole world will be watching with many people putting their shoes on thinking about breaking two hours.

“Today is Eliud’s day but everyone can come out to celebrate this moment. We are all part of history. We all did this together as a running community.”

Bernard Lagat, the former world 1500m and 5000m champion and two-time Olympic1500m medallist, who grew up in the neighbouring village to Eliud, was similarly humbled.

“Eliud told the world that if you set your mind to something nothing is impossible. This is a special day today. Looking at the 1:59:40 time I got so emotional. He worked so hard for it and inspired us. It is something special. Eliud proved no human was limited and he did it.”

"Eliud is a once in a generation athlete and if anybody deserves to break the two-hour barrier it is him,” he adds. “It was an incredible performance and a privilege to be here.

"This project kicked off earlier this year, we took a good look at it and broke it down. A lot of high performance principles can apply to all sports and we helped with a little background support to aid Eliud’s brilliant team around him of Valentijn [Trouw, Eliud’s manager] and Patrick [Sang, Eliud’s coach].

“The great thing about INEOS' role is we brought people together including from the INEOS sailing and cycling teams. INEOS put it all together for this single project and from an INEOS sport perspective it has been fantastic."

Yet the final word should go to Eliud, who celebrated wildly in the latter stages and after he crossed the line.

“Sport can help unify people, I wanted to sell that message to the whole world. Truly no human is limited.” 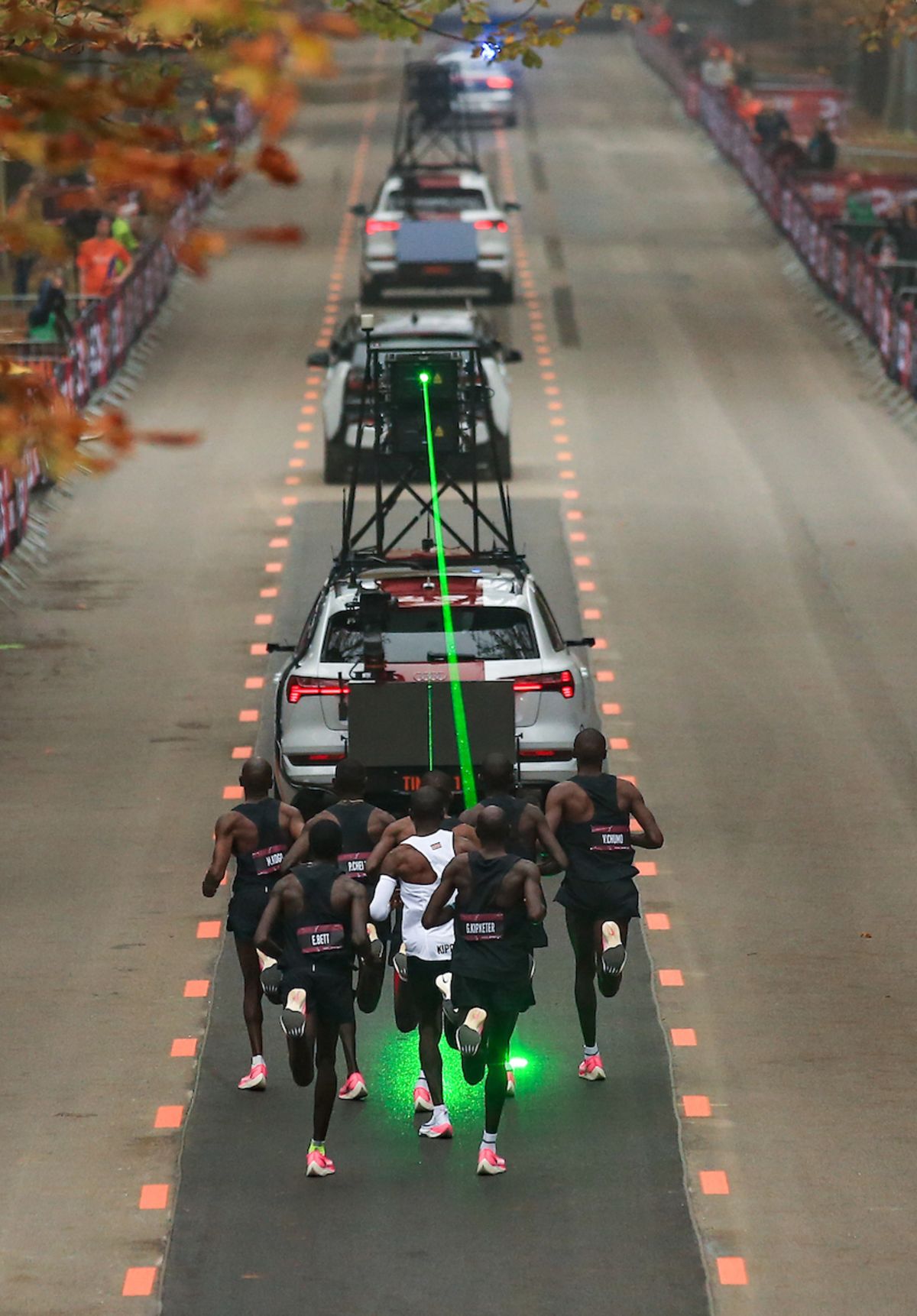