Behind the scenes in Eliud's camp

If ever a quote epitomised the ethos of Eliud Kipchoge then this is it. At its heart is an unshakeable belief in the importance of the team and an acknowledgement of the crucial role others have played in his success.

It is a belief played out every day at the Global Sports Communication training camp on the edge the small town of Kaptagat – situated around 25km North West of the city of Eldoret in the Kenyan Highlands.

To reach the camp requires visitors to take a left from the main road up a narrow dirt track for 100m and to take a sharp right through a wide blue coloured gate.

Driving a further 150m across a field, the only indication of what lies beyond a second gate is a lone steeplechase barrier used for practise by 2015 World Steeplechase champion Hyvin Kiyeng.

Visitors then need to pass through a second gate where they can finally access the GSC training camp – a major endurance runner hub for almost a quarter of a century from where countless world-class performers have harvested a host of medals and titles on the global stage.

The camp is basic but rich in passion and enthusiasm among its 30 or so athletes, who compete in a range of events from the middle-distances up in distance to the marathon.

One main building houses the male endurance runners, who sleep two to a room. To the side a second building includes the women’s dormitories plus the TV room and physio room. A small kitchen and dining area is situated to the back of the camp.

The camp is flanked either side by working farms, where cows and sheep freely roam, which generates a serenity ideal for unwinding from the rigours of training up to 200km a week.

For Eliud, who has been based at the camp for the past 17 years of his stellar running career, it has provided a crucial foundation for his ongoing success.

“Life in the camp is free of distractions and, for me, it is the perfect training environment,” explains Eliud. “Back in 2002 when I first joined the camp it had no running water and we had to pull water from a well. Today the camp has running water and solar panels for heating but in many ways the camp today is almost identical to when I first joined . The accommodation is basic, but it has everything I require.”

Athletes often relax on the handsome green lawn in front of the main male dormitory buildings – a space which also acts as a temporary training area for twice weekly core stability exercises. 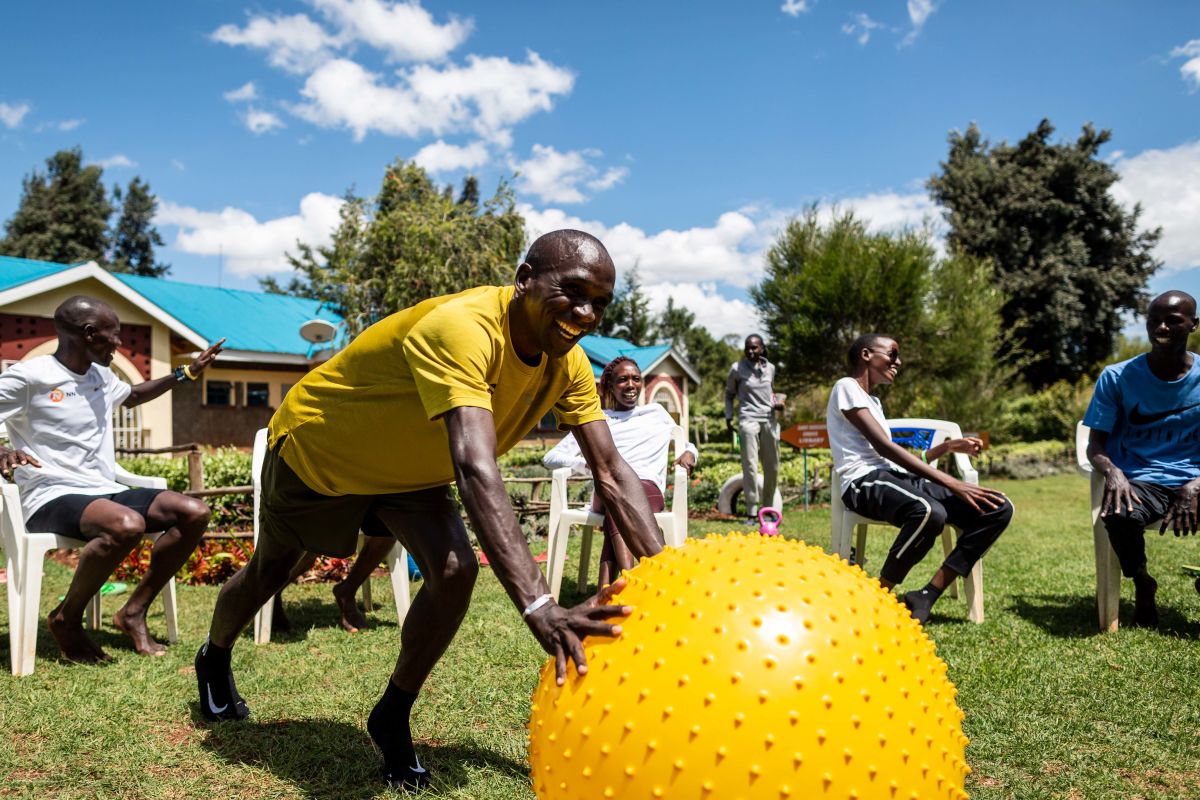 Yet the main purpose of camp life is to rack up the training miles necessary for Eliud and the other athletes to fulfil their ambitious goals.

Athletes spend the weekends at home with their families before reporting in for camp life again on a Monday evening. During more intensive periods of training, the marathon runners will head each Tuesday into Eldoret to train on the hard-packed dirt track at Eldoret’s Moi University.

Wednesdays will be a recovery day focused on strength and conditioning while marathon runners will go for a 30-40km long run on a Thursday on the undulating red hard-packed trails which criss-cross the attractive countryside. Fridays will be more recovery and exercises with a tough speed or fartlek session to follow on a Saturday. The athletes then return home and the cycle is repeated – week after week month after month.

Patrick Sang, the life-long coach of Eliud, explains: “The camp is like a second home to the athletes. There is a cycle throughout the year. Athletes, when they rest, are at their homes, which is where they do they basic training.”

“The benefits the athletes get here through GSC and its partners, is we can have physio and masseuse services here. We have built a system into our training programme so that we can focus more on prevention instead of treating and curing injuries. So when the athletes are in the camp they get all those technical skills and medical support which they don’t have at home.”

Eliud’s presence in the camp should not be understated. An inspiration to all the other athletes who respect his status as the senior member of the camp, the three-time World Half Marathon champion and 2017 New York City Marathon champion Geoffrey Kamworor is one athlete who has benefited from the marathon world record-holder’s seismic influence.

“Eliud is a mentor for all of us and everyone wishes to run like him,” explains Kamworor. “We always try to follow him, to do what he is doing and be with him towards the last parts of the training run. I think that shows the teamwork we have here in the camp and that will help as he prepares for the INEOS 1:59 Challenge.

The camp and more significantly Eliud’s presence in Kaptagat has also had a wider impact on the local running community. Dozens of runners who dream of following in the Olympic marathon champion’s footsteps gather outside the gates of the GSC camp to join in training runs.

With typical grace, Eliud and the group are more than happy to accept outsiders on such runs and Patrick believes this has a wider benefit.

“The community of Kaptagat has grown economically because of the presence of Eliud,” said Sang. “Kaptagat now attracts so many athletes who come here to train and that has a knock-on effect on the economy of the area. So that’s why we say Eliud is more than athlete. He is an inspiration in all aspects of life.”